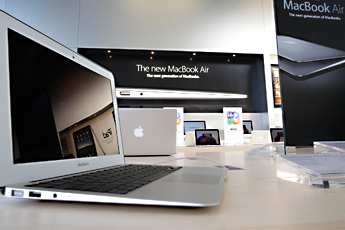 It’s what’s under the hood that’s garnering the most attention. That and the fact that it’s the first to ship preloaded with OS X Lion, the latest operating system refresh, which adds a number of new features and improvements over its predecessors.

A Tool for the Mobile Worker

Because it’s thinner and lighter than most other laptops, it’s ideal for on-the-go businesses — not to mention it delivers up to seven hours of battery life for the 13-inch version (up to five for the 11-inch). The large, multi-touch glass trackpad is still the best in the industry, especially with all the new gestures added to the OS X Lion platform to help you get more done in less time.

Instead of a hard drive, the MacBook Air models use Flash memory — similar to what’s inside an iPad — yielding faster startup times and data access, better battery performance and lighter weight. Flash memory is more durable than a hard drive, but it can’t store as much data as a hard drive. The MacBook Airs start at 64 GB and go up to 256 GB (the latter for $1,599). Even with 256 GB of memory, this is only about half the storage offered by most hard drive-based laptops.

If you do a lot of work in the cloud — that is, accessing, sharing and collaborating on files stored in cyberspace — a Flash-based computer may be all you need. But if you need to carry around a lot of files, you may opt for a small external hard drive to use when needed.

Speedy, but No Optical Drive

The new Intel Core i5 and Core i7 dual-core processors are about twice as fast as last year’s models — which were no slouch either. Aside from the entry-level MacBook Air ($999), which has 2 GB of system memory (RAM), the others have been upgraded to 4 GB of RAM (at 1333 MHz); all machines offer Intel HD Graphics 3000 technology instead of a dedicated video card. For the purposes of this review, I put the old and new 13-inch MacBook Airs side by side and launched and ran the same programs at the same time. Without question, the new MacBook Air was much speedier. (Note: I also updated the older MacBook Air to Lion to compare apples to apples.)

Another issue for some might be the MacBook Air’s lack of an optical drive. Therefore, you can’t load CD-ROM software, play a DVD or burn to a recordable disc.

Also new is a high-speed Thunderbolt port on the right side of the MacBook Air. Thunderbolt allows for incredibly fast transfer speeds between compatible devices (up to 10 gigabits per second, or about 20 times faster than USB 2.0), plus it can also be used to connect high-definition displays, such as monitors and televisions. There aren’t many other Thunderbolt peripherals yet, and it might be some time before we see them.

The new MacBook Airs include a built-in FaceTime camera, so you can make video calls with those on an iPhone 4, new iPod Touch or Mac.

Is It for You?

MacBook Airs aren’t the cheapest solution around. For example, the 13-inch MacBook Air with Core i5 (1.7GHz), 4 GB memory and 128 GB Flash storage costs $1,299. But you can buy a new Dell Inspiron with Core i5 (2.3 GHz), 6 GB memory and 640 GB hard drive for $649.99 (with a DVD drive too). But the Dell weighs 5.4 pounds, is 1.4-inches thick and mostly plastic (compared to the more durable aluminum of the MacBook Air). Plus, there’s an argument to be made about the operating system reliability and vulnerability, Thunderbolt I/O, backlit keys and the differences in trackpads.

However, the MacBook Air is not for everyone, especially if your business runs on Windows software or requires an optical drive. Only after you assess your needs and budget can you decide which laptop to invest in for you and your employees. One thing is clear, though, about this product: Although it’s not flawless, Apple has once again struck an excellent balance between mobility and performance, and is giving its legions of users even more power and features with which to play.