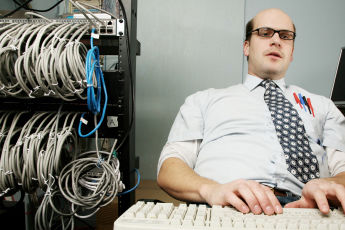 At Thrillist.com, a website that offers under-the-radar shopping and dining tips, employees sit in an open-plan office where they can easily call back and forth to each other, but the technology staff often sits at their computers with headphones over their ears. And after finishing a huge project late last year, they got alternate Fridays off for a few months.

Although most of their non-IT colleagues understood, “there were a few complaints or comments about them taking time off,” says Mark O’Neill, Thrillist’s director of technology. As he sees it, he says, part of his job is to insulate tech employees from the rest of the company so they can do what they do: Create a great product.

“We’re geeks, and we require particular care and feeding,” he explains. “The others see the software that comes out of our team, and that earns respect.”

It’s a conundrum in many companies: Should technology staff be required to follow the same rules as the rest of the company when it comes to everything from dress codes to the use of technology resources? Force them to conform, and you may impede their efficiency. Let them do as they please, and you may inspire resentment in their non-geek colleagues. How do you find the right balance?

Know Which Rules to Break

“There are domains of rules within an organization, just as there are within society,” says Dan Gingras, partner at the executive search firm Tatum LLC, which provides CIOs and other tech executives. “In society, if there’s a speed limit of 45, you can’t go over it without some sort of consequences. But we allow certain classes of people, such as fire truck and ambulance drivers, to break that rule because they have a reasonable need to do so. But there are other rules they can’t break. For instance, the police can carry guns, but they are not allowed to shoot people arbitrarily.”

By the same token, in any workplace, there will be rules that can be broken for a reason, such as one that requires employees to be at work at 9 a.m. — a rule that might not make sense for an engineer who has just worked all night completing an off-hours installation. And there are other rules you might never be allowed to break, such as a rule against flying first class on company business.

“To the extent that you violate cultural norms, communicate the reasoning,” adds Gingras. “And you better have a good argument for doing it. You have to be aware that the more you and your team set yourselves apart from the rest of the business, the less value you’ll be perceived as having to the business.”

IT people are particularly reluctant to follow a rule if they don’t see a good reason for it — and “It’s company policy” doesn’t count. “So if you’re going to institute a rule that’s counter-cultural for geeks, tie it to something real, just as you do for deadlines. You know that if you just make up a deadline, it won’t be as effective as if the technology staff knows that a client is waiting for a project because then there will be public shame and humiliation involved if the deadline is missed,” explains Paul Glen, CEO of the Leading Geeks Company, a consultancy, and author of Leading Geeks: How to Manage and Lead People Who Deliver Technology.

Looser Rules for Everyone?

The thing is, Glen observes, if not having to follow arbitrary rules makes geeks more efficient, maybe the same applies to other employees as well. So, for instance, instead of having a company-wide rule that all male employees must wear a tie and then relaxing it for programmers who sit at computers all day or network engineers who have to crawl into tight spaces, why not relax the rule for everyone — and require ties only on days when clients are visiting?

“You should figure out which rules create the cultural glue that holds your company together,” advises Glen. “Everything else should be adjustable.”