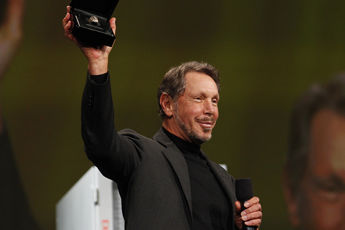 Silicon Valley is no stranger to cutthroat competition. But even there, Larry Ellison stands out.

Many anecdotes about the man paint a portrait of a smart but unscrupulous competitor, someone for whom winning takes a backseat to watching rivals lose. But here’s an illustrative one: At a conference several years ago, Ellison showed a photo of a competing company’s headquarters to staffers. “We’re going to run them out of business and buy that building, which we’re going to bulldoze. After that, we’ll salt the earth. Then we’ll go after their families.”

Stories such as that — recounted by Karen Southwick in her book, Everyone Else Must Fail: The Unvarnished Truth About Oracle and Larry Ellison — paint a caricature of Ellison, who in addition to being fiercely competitive is also a risk-taker who overcame a broken home and an undistinguished college career, and who saw openings in the market and exploited them effectively time and again. Throughout it all, Ellison has stayed true to his vision, seldom worrying about what others think.

“When you innovate, you’ve got to be prepared for everyone telling you you’re nuts,” Ellison once said. “Sometimes people just throw labels at you and throw criticisms around that are not rational, and they call you names,” says Ellison. “You can’t change behavior that you think is right, just because someone is calling you names, and it’s not the conventional way of behavior.”

Here’s how you can think and operate as effectively as Larry Ellison:

Rob Enderle, principal of the Enderle Group and a longtime Larry Ellison watcher, says there’s something refreshing about Ellison’s ability to put his personality on display, consequences be damned. “For the most part, he is what you see,” says Enderle. “You don’t see a facade when he’s working.” Part of this is because as CEO, Ellison outranks the legal department, typically the mechanism for reining in loose cannons.

In modern-day Silicon Valley, such complex characters (Steve Jobs was another) stand out in a sea of empty suits, says Enderle. People who are genuine like that inevitably spawn detractors as well as advocates, whereas colorless execs are likely to prompt only a lukewarm response.

Larry Ellison started out as a salesman, and Enderle groups him among a special class of “Salesman CEOs.” (Another example is Steve Ballmer of Microsoft.) The key to being successful in that line of work, of course, is an unshakable confidence, being able to absorb 10 “nos” for every one “yes.”

That’s not to say that Ellison is so sure of himself that he can’t see the value of criticism. “If anyone has a logical criticism and can explain to me why what I’m doing is wrong, and they can convince me, I’ll change,” he once said. “If they have good reasons, I’ll just alter my behavior. I love it when people point out when I’m wrong and explain to me why I’m wrong. That’s great. I don’t want to be wrong. I would love to be right. If I am wrong, I love it when people stop me.”

There’s often a thin line between confident and arrogant, and Larry Ellison frequently crosses the line. For instance, Ellison spent the better part of the ’90s picking pointless fights with the larger Microsoft. But there’s one career in which brashness is a job requirement: entrepreneur.

Rob Reeves, president of Redfish Technology, a tech recruiter, says that someone trying to emulate Ellison’s demeanor wouldn’t make it through the second round of most job interviews. “It’s a plus if you’re starting your own business,” says Reeves about Ellison’s super-confidence, “but if you’re applying for a job, you have to show the soft skills of being able to work as part of a team.”

Still, if you want to be as successful as Larry Ellison, you’d be wise to focus on his propensity for self-invention, risk-taking and immunity to criticism. Ellison’s rise from mediocre student to CEO came in part from his desire to prove himself (Ellison’s stepfather, Louis, often told his adoptive son that he would come to nothing) and in part because he was able to see an opening in the market that no one else did (for relational database technology in the 1970s).

Reeves speculates that Larry Ellison is just wired differently. But perhaps it’s his far-sightedness and have-nothing-to-lose principle that drove his success on such a large scale. Even on his off time, Ellison channels his competitive instincts into yacht racing, a pastime that almost killed him and his friends in 1998 when a typhoon hit the coast of Australia during a race. A brush with death did not cause Ellison to re-evaluate his life, though. Instead, it merely solidified his worldview: “I’ve known for a long time that life is glorious and fragile and short,” Ellison said at the time. “This re-emphasized it; it didn’t really change me.”